This game was already known in ancient Greece from the end of the 7th century BC. The board consisted of 5 parallel lines. The central line was called the sacred line, as described by Julius Pollux (2nd century AD) in his dictionary:

Each player places five coins on five lines. With five lines on each side, the middle one is called the sacred line. The fact of having to move a piece that has reached this line has given us the expression to move the coin from the sacred line.

The board can also be made of two parallel rows of five squares: the two central squares represent the sacred line.

The game is for two players. They sit on either side of the short edges of the board. Each player has as many counters as there are rows on the board, that is to say five. Players take turns to roll a die and move their counters from line to line viz. square to square accordingly. The goal is to gather one’s five counters on the sacred line.

In various cities in Asia Minor, Ephesus, Smyrna and Aphrodisias, a large number of board games consisted in two rows of eleven squares. This game was probably a Roman enlarged version of Five Lines. The central line corresponded probably to the sacred line.

The game is for two players. They sit on either side of the short edges of the board. Each player has as many counters as there are rows on the board, that is to say eleven. Players take turns to roll a die and move their counters from square to square accordingly. The goal is to gather one’s eleven counters on the sacred line.

Three men’s morris (unknown Latin name) consists of a square crossed by two lines, vertically and horizontally (variant A) or diagonally (variant B). Each player has 3 counters and places them on his or her turn on one of the 9 points where the lines intersect. Once the three counters are placed, they move along the lines from one point to a neighbouring point. The goal of the game is to align 3 counters. 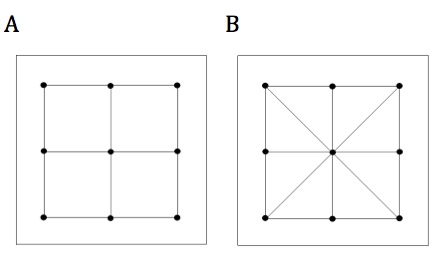 The game of 12 points

This very popular Roman game belongs to the backgammon family. It appears at least from the 2nd century BC onward. The board game consisted of 3 rows of 2 x 6 squares. The precise rules are unknown. The game was for players. Each player had 15 counters and rolled two dice in turn.

They placed their counters on the board in the same row of squares according to the number obtained with the roll of the dice. The counters moved around the board before they had to be born off.

Two or more counters on the same square blocked the square and protected the counters from being captured. Single counters could be captured and had to be reintroduced before continuing. Some board games hint to the fact that the middle row had a special function. We believe it was the place where captured counters were kept.

Alea is a variant of the game of twelve points (duodecim scripta). This game appears as early as the 3rd century AD. Just like the duodecim scripta, it consisted of three rows of 2×6 squares, but it differs from the other game because of its use of 3 dice instead of 2, as explained by Isidore of Seville (7th century), who explains how the game changed its name to Alea (“dice”). Etymologies, 18, 64:

“The figurative senses of Alea (De figuris aleae): Furthermore, certain dice-players think that they per-form their art by way of an allegory of natural science, and conceive of it as bearing a certain likeness to natural phenomena. They maintain that they play with three dice because of the three tenses of the world – present, past, and future – because they do not stand still but tumble down. They also hold that the paths on the board are divided into six places, for the human ages, and in three lines, for the three tenses. Hence they say that the board is arranged in three lines.”

Many marble lanes are still visible in Roman cities. Their name was not preserved nor were game rules, but there were probably many variants. Two parallel lines marked the start of the throw. The goal was to reach the end hole at the end of the track, avoiding intermediate holes. A variant: capture other players’ marbles by sliding one’s marble into a hole already containing one or more marbles.

Because these cookies are strictly necessary to deliver the website, you cannot refuse them without impacting how our site functions. You can block or delete them by changing your browser settings and force blocking all cookies on this website.

We also use different external services like Google Webfonts, Google Maps and external Video providers. Since these providers may collect personal data like your IP address we allow you to block them here. Please be aware that this might heavily reduce the functionality and appearance of our site. Changes will take effect once you reload the page.